“You and your mom, always doing things the hard way…” -Grandpa

In August of 2017 I lost my grandpa. It was a devastating blow even though we saw it coming. He was diagnosed with Alzheimer’s far too young, and slowly I watched him forget who I was. It started with him repeating himself and then showing behaviors I had never seen. I saw my grandpa cry. I saw him get angry, and I heard him yell, all things I never experienced in the 35 years prior. I hated when people said “this is the new normal”, I wanted to scream at them WHAT DOES THAT MEAN? THIS IS NOT NORMAL! It felt like anything but normal. I wanted my grandpa back. The one who chased me endlessly, made fun of me just to get me to laugh, burst into laughter at my dirty jokes I told as a child…the one who always protected me and listened to me and told me what I needed to hear. Ugh, I miss him so much it hurts.

After he passed, and still to this day I can’t talk about him without being brought to tears. I carry a small bit of his ashes with me because I don’t know what to do with them, I’m not sure what will bring justice to the sentence he was given. Nothing will change what is…and nothing will heal what is gone. The first bit of ashes took me on a long adventure. Which is what this post is about. It’s not about how incredibly sad I am, but more about how he was proven right…yet again…about “the hard way”.

It was 2:30 in the morning on a Thursday. Two of my girlfriends showed up at my house and we set off to check off a bucket list item, climbing Mt. Saint Helens. For a long time I’ve been wildly obsessed and fascinated with Mount Everest – I’ve read all the books and seen the movie countless times. So, Mt. Saint Helens was the beginning of my mountain climbing adventures, or so I thought. I knew I’d never summit Everest, but I wanted to go to base camp one day. Base camp is higher elevation than the summit of Mt. Rainier, so to me, this was enough. Just to see Everest with my own eyes would be thrilling! I digress. After our Helens adventure, I have almost entirely given up on this idea.

When we got to the trailhead it was still dark. Each of us changed into our appropriate mountain climbing/hiking attire and packed, and repacked, our packs. Mine was 40 pounds, but I had all the things. My cousin strongly suggested the ten essentials – I had that covered, including enough emergency blankets to build a fort, plus a ton of food and water and my camera. I was sick the days leading up to the climb, 104 temp the day before, but I was determined. In my pack I carried ashes of the greatest man I ever knew and I wanted to leave a piece of him at the top of what would be my first ascent.

The morning light started to peek over the hill, and once we made it past the tree line we could see the top of the crater. It looked so far away while simultaneously being “right there, within reach”. Eagerly we made it past the waterfall and slowly crept up to the boulder trail. The wind kicked up at times to a point we had to take cover before continuing to climb as we weren’t sure if we would get blown off the edge of the rocks. Soon enough, about 6 hours into the day, we reached the snow. There were good and bad things about this part of the climb, but thankfully we were over-prepared with our gaiters and crampons. As we continued I was starting to really feel the heaviness of the flu I had the day before. My chest felt dense and I wasn’t taking in enough calories. As I came to a resting point on an island of boulders in the snow you could see my legs cramping up even when I wasn’t moving. At this point, I wasn’t sure I was going to summit. Somehow, by some saving grace, a man approached who had climbed Helens many many times. He was, what I’d call, an expert. He offered me jerky and Gatorade and talked to me for quite some time. I was visibly upset and I told him, “I have to make it, I have my grandfather’s ashes to deliver to the top”. He warned that the last ¼ mile was also about another 1,000 vertical feet. I don’t know that I’m into this sort of thing but GOD WILLING I mustered up the energy. This sweet man made prints in the snow for me to follow and slide my feet into making it easier to reach the top. As soon as I drug myself to my feet and peered over the edge, I lost it. I cried and I sobbed and I remained choked up for the entire time I was looking into the vast crater. Finally I dug deep into my pack and pulled out my grandpa’s ashes. As I let them off into the wind I said “I give you this one thought to keep, I am with you still, I do not sleep, I am a thousand winds that blow, I am the diamond glints on snow, I am the sunlight on ripened grain, I am the gentle autumn rain…”.

There were other people at the top, laughing and enjoying their time in nature, all the while it fell completely silent – almost eerily all the background noise faded and I just heard the wind carrying pieces of my grandpa to rest. He never asked to be taken to that mountain, but I insisted on him being part of my adventure. I think because of him, I made it.

The decent, that is an entirely different story…almost as if my grandpa was watching and giggling to himself about how silly I was. Getting down is nearly as difficult as getting to the top, it could potentially be MORE difficult depending on the day – on this day, it was. We glissaded down the snow with our ice axe and completely useless garbage bags (noted: bring rain gear…). Then navigating the terrible boulders was torture on our knees and wreaked havoc on my muscles. I honestly thought they would never end. I found myself thinking “I DO FITNESS, why is hiking so hard, it’s WALKING for crying out loud”! Once we reached the tree line we were instantly lost. There are a few trails leading back…but some not all the way back to the car. It took us a couple of hours to finally figure it out, and we eventually got down just before dark. We were on that mountain for sixteen hours. Most people say it takes them 12 total. So, I went ahead and did it the hard way – I was sick, I was mal nourished, I was underprepared and over prepared all at the same time. But like he said – If it wasn’t the hard way, I wouldn’t do it at all. Joke is on me. Thanks grandpa. I love you. 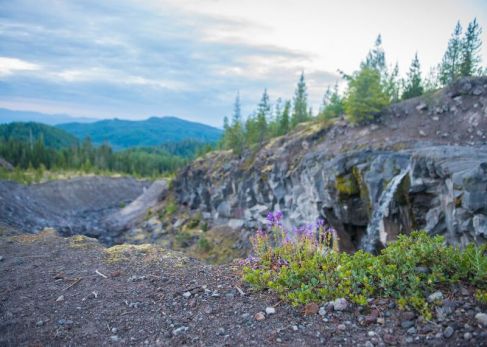